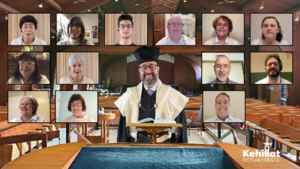 This Shabbat is Shabbat Shirah, the Sabbath of Song, so called because the weekly Parasha (B’shallach) contains the Song at the Sea sung by Moses, Miriam, and the Israelites as they crossed the Sea of Reeds on dry land during the Exodus from Egypt. The midrash says that this grand choir miraculously sang in perfect unison without even holding a single choir rehearsal…

COVID has inspired us to replicate that feat! A couple of months ago, our wonderful choir started meeting again in-person with the renewed vision of our first choral Shabbat in almost two years, for Shabbat Shirah. Sadly, Omicron has pushed back its “revival appearance”, so we once again pivoted to a virtual choir offering. Kol Beit Yisrael would have exactly 11 days to learn and home-record for a virtual choir production of “Yigdal”, from the Friday night service. And they responded and did so… without any choir rehearsals!

We hope you will watch our setting of Yigdal, composed by Cantor Meyer Lyon, arranged by Stephen Glass for male choir, and tweaked by me for our mixed-voice choir. The YouTube link is below. Yigdal is one of the most renowned Jewish hymns, and is based on the “13 Principles of Faith” formulated by the Rambam (Maimonides) to describe the Jewish People’s unfaltering belief in God. The liturgy is ascribed to Yechiel b’rav Baruch Dayan, who took eight years to complete it in 1404 – indeed, if you look closely at the last line (“Meitim y’chayeh Eil, b’rov chas-do; Baruch adei Ad…”), it contains the author’s name, a common device used by paitanim (poets) to ‘sign’ their work!

About the music’s composer: Though his early childhood completely eludes the history books, Meyer Lyon (1751-1797), who may have been born in Frankfurt, Germany, was sought and invited by German aristocrats in the UK to join the choir at the Great Synagogue of London (Duke’s Place) at the age of 16. He earned a handsome salary of £40 per year, with the condition that he was to behave as an observant Jew. He developed into a star to the rich and famous, and enjoyed a career as an operatic tenor in Drury Lane and Covent Garden, where he went by a stage name, Michael Leoni. More foggy history later, he subsequently became the first professional Chazan at the English and German Synagogue in Kingston, Jamaica, an obvious fit given his connections and Jewish experience in both circles.

According to Wikipedia: “The first record of Leoni is in October 1760 where the actor David Garrick refers to him as ‘ye boy Leoni’ – he sang a role in Garrick’s “The Enchanter” at Drury Lane Theatre which was ‘received with great applause’. This suggests that Leoni could not yet have been in his teens at this time, and that therefore the story of his being summoned to London cannot be true. In fact it would be surprising if it were true since there is no evidence that the congregation there had any concerns about musical standards. The fact that the synagogue was only too happy to dock Leoni’s pay by £8 a year in 1772, due to its financial problems, also argues against the congregation’s supposed dedication to its cantor. It is therefore rather more likely that, wherever he was born, he lived in London from an early age and was talent-spotted, probably in the synagogue.”

At any rate, Leoni’s melody for Yigdal became the de-facto Ashkenazi melody the world over, even to this day. It is this beloved tune, made even more delicious by the beautiful harmonic palate of Stephen Glass, that we have recorded without any rehearsals, thanks to the talents and dedication of our beloved Kol Beit Yisrael choristers!